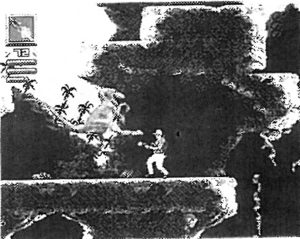 Protected by the latest electronic safeguards, thrill-seekers watch as Brachiosaurs wallow in the swamps and herds of Tricertops thunder through the jungle vines. Yet an unexpected fate awaits the fearsome beasts and unsuspecting tourists alike. A sudden, violent hurricane rips through the park, trapping the humans and freeing the most terrifying animals of prehistory!

Dinosaurs rampage across the island, battling other beasts and eluding the traps and weapons of their human enemies. And one man, paleontologist Dr. Alan Grant, stranded in the storm, pushes on to safety while dodging the slashing jaws of Tyrannosaurus Rex and the paralyzing spit of the Dilophosaurs!

Now it’s your turn. Take on the role of the Raptor or Dr. Grant. Plunge into a heart-thudding race for survival in a techno-primitive world – if you dare!

Press Start at the Title screen to bring up the Main Game menu. To choose an option:

Immediately plunge into your death- defying race through unknown and uncharted dangers. You’ll start with the options you’ve most recently chosen in this game session. If you’re just beginning the game, you’ll play as Dr. Grant, at the Normal skill level, with the default button controls. (See pages 12, 14 and 16.)

Choose to be Dr. Alan Grant or the Raptor. To choose your character:

As the bold paleontologist, you’ll arm yourself with serious weapons, including tranquilizer darts, a stun gun and concussion grenades. You’ll face a terrifying torrent of perils as you attempt to outwit the deadly prehistoric predators, reach the safety of the Visitor’s Center and save the rest of the tourists.

As the razor-clawed, cunningly vicious Raptor, you’ll clash with other beasts, snare food and foil the attacks of heavily-armed human foes. Your goal is to reach the Visitor’s Center, break through to the dock, and board the boat to escape the island!

Choose your game options before starting play. To set the options:

Choose an Easy, Normal or Hard skill level. If you don’t change the setting, you’ll play a Normal game.

Toggle the game’s music and sound effects on or off. The default setting is Music On.

Choose from six settings to customize the actions of Buttons A, B and C. If you don’t change the settings, they will be:

A password appears at the beginning of each new level, starting with the Power Station (level 2). Write down the exact password on the spaces provided on pages 86-87 of this manual. Then, to start the game at a later level, go to the Password screen and enter the password for the level you want. Here’s how: 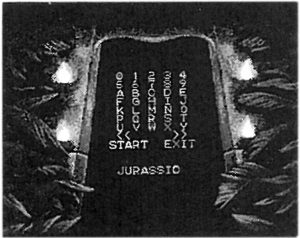 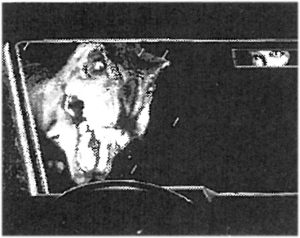 Dense, dark clouds have packed the sky for days, smothering the horizon in all directions. But your research can’t wait, so you head out in a park vehicle, crisscrossing the island with your head full of questions and your notebooks filling up with scientific data.

You’re all the way across the island when the rain starts pelting your vehicle’s roof. Then the storm kicks up, and as the winds whip through the jungle palms, your hopes weaken. You round a turn, headlights shimmering on the electrified fence ahead and its identifying sign: T. Rex.

With a piercing flash, lightning slices the sky. Everything goes dark. Then deafening silence. Has a minute gone by? Five minutes? Fifteen? Suddenly, huge jaws rear up in your windshield, inches from your face. Razor teeth crunch into the vehicle’s framework. Then you’re in a salt shaker, bumping, head snapping, like the last grain of salt – or the last man on earth!

The next thing you know, you’re dazed, bruised…and still breathing. The vehicle’s wrecked. Something heavy is shuffling in the grass nearby. Better clear your head quick and figure out how you’re going to stay alive!

up
Climb ladders, shimmy up cables

Stand in front of switch, then D-Pad up
Activate switch

Hand-over- hand on wires or vines

Jump
Jump button. When Grant jumps onto a higher ledge or platform, he automatically pulls himself up.

Remember: You can reset the Select, Fire and Jump buttons on the Options screen at the start of the game.

Reckless speed is your enemy. Your trek through the dangers of Jurassic Park must be surefooted, aggressive and smart. Every area of the island holds its own unique hazards. The sooner you solve them, the longer you’ll survive!

You start the game with two weapons, a tranquilizer dart gun and a stun gun. You’ll find ammunition scattered throughout the areas, and as you pick up ammo, you’ll also gain more weapons.

As you trek. you must learn to use your weapons effectively. They won’t destroy the dinosaurs, only stun or paralyze them for a short time. That means you’ll be using up a load of ammunition. Pick up everything you can find along the route, so you’ll never feel the click of an empty weapon just when you need it most!

You begin each game with three lives. Your Health bars whittle down as you’re injured, and when a bar disappears, so does your life! If you have lives left, you’ll start the level from the beginning, carrying over all the weapons and ammunition had when you died. you 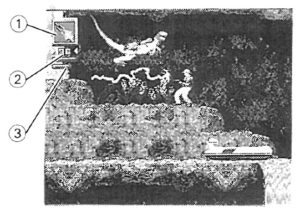 Watch the upper left corner of the screen for important information:

Shows how many units of ammunition you have for your current weapon. When you run out of ammo, you’ll automatically switch to another weapon.

Show your current condition. You start the game with three lives. As you take damage, the lowest Health bar decreases. If a bar disappears, you lose one life and you must start the level over.

You can use a number of specialized weapons to subdue the rampaging animals. But be wary: as you gain ground, the dinosaurs develop a resistance to your tranquilizer darts and gas grenades, and they learn to evade your shots with expertly timed dodges. You’ll have to figure out ways to outsmart these instinctively cunning beasts.

contain a weak dose of tranquilizer. The larger the dinosaur, the more darts you’ll need to subdue it. Tranquilizer effects wear off rapidly.

their targets for long time.

transmits an electric shock that knocks its victims unconscious for a short time. The stun gun has three charge settings: low, medium and high. Hold down the Fire button to charge the stun gun, then release it to fire. The longer you press the button, the more powerful the charge will be, and the more units of ammunition you’ll use up.

contain a knockout gas that temporarily disables the dinosaurs.

grenades disorient any beast that is overcome by the fumes.

explode, knocking out dinosaurs for a long time.

You can never have too many power- ups! Search for these survival aids throughout the levels, and pick up as many as you can. Their effects will vary depending on your chosen skill level. The harder the level, the less extra power you’ll get.

restores part of your Health bar.

THE RAPTOR: SURVIVAL OF THE TOUGHEST! 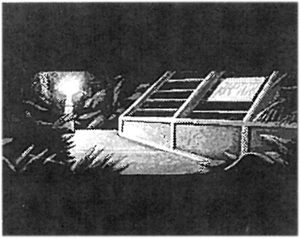 Life inside a barred enclosure is meaningless. A Raptor needs to be free. So when the piercing light struck and the bars lost their sting, the Raptor escaped! 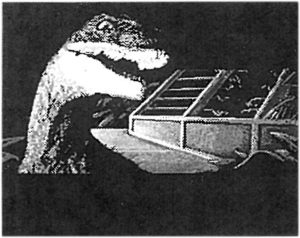 Now it roams free, one of the deadliest, most cunning of the Jurassic Park beasts. It scents the trail of the small, upright creature the one who hatched from the strange egg that the Tyrannosaur destroyed. The scent tells the Raptor that the creature will be very good to eat….

Bite and shake
D-Pad down + left/right

Jump
Jump button. When the Raptor jumps onto a higher ledge or platform, it automatically pulls itself up.

Remember: You can reset the Select, Fire and Jump buttons on the Options screen at the start of the game.

The clash of 65-million-year-old Titans begins! Pound for pound, you are one of the most powerful of dinosaurs. Only the Tyrannosaurus Rex can match you in total strength relative to size. Your long, crushing jaws are a secondary weapon; the six-inch sabre claw on each foot rakes deep into your foe’s limbs. quickly ending the battle.

But Jurassic Park is bristling with menace: prowling, razor-toothed animals. slippery ledges, deep chasms and that most dangerous enemy, man!

You start the hunt with three lives, and your Health bar diminishes as you take damage. When the bar disappears, your life ends. You’ll restart the level from the beginning as long as you have lives left.

As a Raptor, you must constantly eat or you will lose health and die. Gobble turkey legs as often as possible tO restore your health.

Track your excursion through Jurassic Park on the map that appears before each level. The map also reveals the password to the level you’re about to begin. Grant must storm through seven levels of deadly hazards; the Raptor rampages through five levels.

The Brachiosaur is a huge animal standing about 35 feet tall, with a long, arching neck balanced by an equally long, tapering tail. Surprisingly quick for its size, the Brachiosaur is a plant-eater that spends much of its time with its tiny head in the trees, munching on branches and leaves.

The Compy (Short for Procompsognathus) is a pint-sized but powerful animal whose bulldog- like grip with its jaws can bring down far larger beasts, and is especially effective on humans.

About four feet tall, the Dilophosaur is spotted like an owl, with a brilliantly colored crest that fans out around its neck when aroused. Seemingly playful, this kangaroo-like carnivore makes a curious « hooting » sound before its deadly attack. It kills by spitting on its victims, from as far as 20 feet away, with a lethal venom that blinds and paralyzes its prey.

The Raptor reaches a full-grown height of about six feet. Known formally as the Velociraptor, this awesome predator has a six-inch, retractable, razor-like claw on each foot. It is extremely fast-moving and can reach speeds of up to 60 mph. The craftiest and deadliest of the Jurassic Park dinosaurs, the Raptor frequently leads its victims into surprise ambushes. It is extremely vicious, as intelligent as a chimpanzee, and seems to kill for sport.

The Triceratops is nearly the size of an elephant. It is built low to the ground, with huge stumpy legs. While generally a gentle grazer, the Triceratops carries three huge horns on its massive head for defense, with the longest horn protruding from the middle of its face. A lumbering beast, the Triceratops grazes at ground level for grasses and plants.

Tyrannosaurus Rex, the most ferocious of all dinosaurs, is the classic bloodthirsty prehistoric terror. Standing about 25 feet tall and stretching out to about 49 feet long, the T. Rex with its huge, powerful jaws can swallow a human being whole!