Armed with the ultimate stealth jetcopter you are about to penetrate the main military base of a dangerous terrorist nation.
At this base-better known as the megafortress- preparations for a world takeover are well under way.
The sooner you can get in there and the farther you can go- the better our chances for preventing a third World War.

The Place: The MegaFortress of the terrorist regime.

The Problem: The terrorist-run country, Cantun, has become completely power hungry. Their aim? To take over the whole world.

They’re gathering together all their tanks. All their ships, including several major aircraft carriers. All their bomber planes. All their all-terrain attack modules. Even an outdated rail service they’re using to haul suppli9S. And, of course, all their men.

Their impenetrable military base is hidden deep in the center of the country. Ships can’t getthere. Tanks can’t get through. High-flying spy planes and bombers are captured-and struck down -by radar.

The only way in is a sneak attack. The only time to try it would be in the early, sleepy hours of the morning. The only thing to use would be a helicopter. And the only helicopter for the job is Tiger-Heli.

Tiger-Heli is the result of a billion-dollar defense project to create the ultimate stealth jetcopter. It’s turbopowered. Forged from ebony metal and glistening chrome. And armed with computers, heat-seeking missles, impact bombs and radar scramblers.

Tiger-Heli can reverse directions in nano-seconds. And can fly anywhere from high in the stratosphere down to inches above the ground.

But it’s going to take more than fancy flying to handle this job. You’re going to need nerves of steel. And a willingness to annihilate everything in your path.

It’s going to start out tough. And get even tougher. But with Tiger-Heli, you can do it.

The following illustration shows you the control points on your « NINTENDO ENTERTAINMENT SYSTEM« ® controller. Throughout this instruction book we will refer to these controls by ‘the names indicated in this illustration. 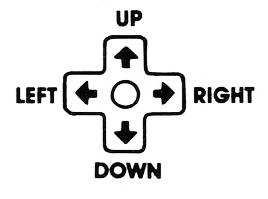 TO MOVE RIGHT OR LEFT —
Press the CONTROLLER ARROWS RIGHT or LEFT.

TO BOMB —
Press BUTTON A.

TO FIRE A MISSILE —
Press BUTTON B.

TO PAUSE —
Press the START BUTTON.

Insert the Tiger-Heli® CARTRIDGE as described in your NINTENDO ENTERTAINMENT SYSTEM® manual.

For 1 player — Push the START BUTTON on Player 1’s controller.

For 2 players — Press the SELECT BUTTON (on player 1’s controller) so that the helicopter is next to « 2 PLAYERS » and push the START BUTTON.

Once you press the START BUTTON, you will see the following information on the screen:

At the beginning of each game you get three TigerHeli jetcopters. The game is over when all your helicopters are lost.

There are two ways in which you can acquire new helicopters:

1.) For every 10 BONUS BLOCKS you shoot you get a new helicopter.

The points you earn for gunning down different types of enemy items are added together to produce your final score.

Here’s what earns what: 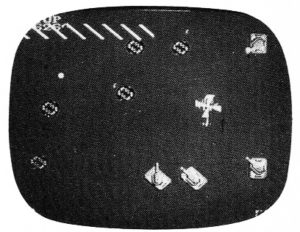 Tiger-Heli has split-second maneuverability and incredible flying range so you can dodge even the fastest missle. Or rush anything that moves.

With Tiger-Heli, you have unlimited firing power. And with every blast you shoot a wave of four deadly missiles.

You start with two impact bombs that can detonate an entire block. Once you use them both, there is a way to collect more. (See GREEN CROSS, below).

One of your advantages is the underground guerilla group. They live on the base. But they’re actually on your side. And they’ll try to send you help or ammo whenever they can.

To let you know they’re around they’ll send you a sign. It will look like a First Aid cross. Only it will change colors. Once you spot a cross, you need to liberate the supplies from the surrounding enemies by strafing the area. After shooting the cross to release new supplies, you’ll get different kinds of assistance depending on what color the cross is at the moment you shoot it.

Here’s how each cross will help you:

Shoot the cross when ifs grey, and a support helicopter that fires missiles in a forward direction will appear. To link up with this helicopter, move directly alongside it.

Shoot as many BONUS BLOCKS as you can. Because for every ten you shoot. you get another Tiger-Heli.

Shoot the cross when ifs red, and a support helicopter that fires missiles in a sideways direction will appear. To link up with this assist helicopter, move directly alongside it.

Shoot the cross when ifs green and the « B« -SIGN will appear to give you another bomb. But in order to get the bomb on your helicopter, you must fly directly through the « B » -SIGN.

NOTE: Tiger-Heli can only carry two bombs at one time. If you already have two bombs when you shoot a green cross you will get points- instead of another bomb.

Now that you’ve been briefed on all you need to know about operating TigerHeli, it’s time to make your move. You’ve got the ammo. You’ve got the maneuverability. You know you’ve got hidden allies down there. And you even know what the enemy’s got.

So strap yourself in. Take a deep breath and power-up with only one thing on your mind………….VICTORY.