For Deutch and Nederlands, check out directly the .PDF of the original instructions booklet.

Go to the hole. Go strong. Deliver the facial. Show them your stuff. And your 360° rimrocker. And an intense Tarzan slam for good measure. You’re on fire! This is the NBA®, and you’re playing NBA® JAM™   the toughest two-on-two competition around and the only game in town!

Play with the superstars from all 27 NBA® teams- from Ewing and Pippen in the East to Kemp and in Robinson in the West— with veteran superstars like Malone and Parish to sensations like Mourning and Laettner— each with his own on-court personality and attributes. Play one-player, two players on the same side or two players against each other, or with a Super Multitap™ , start a two-on-one or four-player game with your friends!

All the hard-hitting hardwood and « incredible dunks » of the arcade are here, complete with speech, record-keeping, seasonal play and the half-time report, with new features like tag mode, making not playing NBA®JAM™ a very « bad decision. »

The default configuration is as follows:

Player has possession of the ball:
(Default buttons are in parentheses)

Player does not have possession of the ball:
(Default buttons are in parentheses)

SETTING UP FOR THE JAM

When the title screen comes up, press the START BUTTON. You will be presented with three choices— HEAD TO HEAD (player vs. player), TEAM GAME (2 players vs. computer), or OPTIONS. IF you are using the Super Multitap™  you will be presented with two choices START GAME or set OPTIONS. Highlight your selection using the CONTROL PAD and press the START BUTTON.

OPTIONS allows you to set certain game options. Use the CONTROL PAD to highlight the desired option and the A, B,X, or Y BUTTON to change it:

Allows you to choose how fast the game clock will count down each quarter, from Very Slow to Very Fast.

In a one-player or one human per team game, NBA® JAM™ allows you to select how you wish control your teammate.

OFF
is the default. Like the arcade, you control one player the entire game, and the computer controls your teammate (unless a human player should « jump in » with his START BUTTON).

ON
enables you to control both the movement and the ball-handling of whichever player on your team has the ball. In other words, you pass off control when you pass off the ball. The « tag » occurs when your teammate gains possession, So if a pass is intercepted, you retain control of the player who passed.

If a team falls far behind, this feature increases the odds that that team’s shots will go in, ensuring a close and competitive game. If this feature is off, both players are given a « fair shake.«

Allows each player to select which commands are associated with which buttons. Use the CONTROL PAD to scroll through the possible combinations. The default configuration is as follows:

If you are using the Super Multitap™, select START GAME. Select the controller number corresponding to the player you wish to control— controller 1 is player 1, 2 is 2, 3 is 3 and 4 is 4. Everyone who wishes to participate should then press the START BUTTON on their respective controllers.

Use the CONTROL PAD to move the cursor on top of the desired letter and press the A,B,X or Y BUTTON to select. If you are playing for the first time, or do not wish to enter a password with your initials, select « EX » (exit) on the password screen. NBA JAM’s record-keeping feature stores each player’s record, ranking, winning percent, the current streak and the teams he/she has defeated! After each game, you will be given a new password updating your record. Although the password is given after each game, your Super NES™ will automatically keep track of your record as long as it remains ON, allowing you to play a Jam session without having to write down and re-enter the pass- word after each individual contest. Your password will not only work on your Super NES, but your friends’ machines as well, enabling you to bring your record wherever you play!

Next, players must choose their teams. Use the CONTROL PAD to scroll around the teams. Each team is composed of two NBA teammates, each with ratings in 4 categories: Speed, 3 Pointers, Dunks and Defense. A complete team-by-team listing of these stats appear on pages 9-10 of this manual. Pressing the A,B,X or Y BUTTON switches which of the teammates the player controls. Press the START BUTTON when your selection is made.

If a game is already in progress, another player may « jump in » at any time, taking over control of one of the computer-controlled players, by pressing the START BUTTON on their controller.

An NBA® JAM™ game is divided into 4 quarters 4 of three minutes each. A game begins with a tip-off, as two players leap for the ball in order to gain control. Possession of the ball at the beginning of the second and fourth quarters goes to the home team (team two), and to the visiting team (team one) starting the third regardless of who wins the initial tip or who possesses the ball when the previous quarter ended.

The object of the game is to have outscored your opponents when the final buzzer sounds. A 24 second shot clock is in effect. A basket counts for two points when it is shot from inside the three-point line, and three points when shot from behind it.

A defensive player can block a shot, but only when the ball is on the upward part of its arc. If it is touched by a defender on its downward flight, a goaltending call is made, and points are awarded whether or not the basket was going to go in. Once the ball touches the rim, however, it can be grabbed by any player, either offensive or defensive.

To make identifying the ball-handler easy, whenever a player has possession of the ball, an orange basketball inidcator will appear behind his name at the top of the screen. If nobody has possession— the ball is in the air or has been knocked away— there is no indicator. If a player scores three baskets in a row, he is « on fire! » During this time, he has unlimited turbo, and a much better chance of sinking shots from anywhere on the floor! Only one player can be « on fire » at a time. Being « on fire » lasts until the next opposing basket goes in, meaning that a teammate can score without disrupting the fire. Even if the opposing team cannot score, however, your fire will eventually go out by itself. The ball glows when the player on fire holds it and smokes when he shoots it!

Beyond these, there are very few rules to an NBA® JAM™ session. There are no fouls— no reaching in, no hacking, not even a pushing foul, so play strong and take no prisoners! The controls for each human player are as follows: 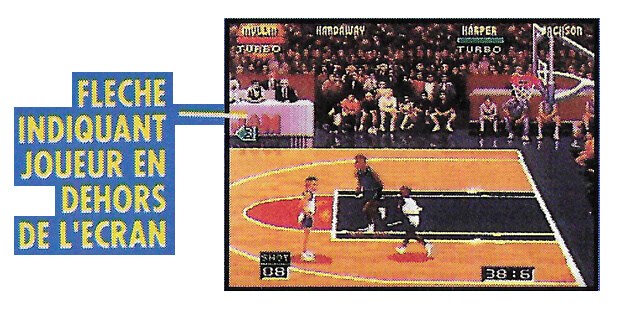 Moves your player up and down the court. When any player is off-screen, his position is marked by an arrow with his player number and color, the height of the arrow showing where he is vertically on the court, and distance from the edge showing how far off-screen he is.

START pauses or resumes a game.

When your team has the ball,

the SHOOT button will cause you (and on a one- human team, your computer teammate as well) to shoot for the basket. Your player releases the ball when you release the button.

Releasing the ball at the apex of your leap gives your shot greater accuracy, but releasing it quickly or very slowly can often prevent a leaping defender from blocking or stealing the ball.

Tapping SHOOT quickly exe- cutes a head-fake which may deke the defense out of its shoes, but it stops your dribble so you must either pass or shoot the ball before you can move!

When your team does not have the ball,

SHOOT/BLOCK causes your player to jump up for a block. Timing is crucial to denying the shot.

Many times your defender will get piece of the ball without rejecting the shot completely. The ball will flash white whenever your defensive player makes contact with it.

When your team has the ball,

the pass button will cause you (and on a one-human team, your computer teammate) to pass the ball to his teammate. But a passed ball is easily intercepted by a defender, so look before you pass!

When your team does not have the ball,

tapping this button causes your player to swipe at the ball in the hopes of either stealing it or knock- it ing it out of an opponent’s hands.

TURBO causes your player to run faster than he ordinarily would (determined by his attributes), whether on offense or defense, allowing you to blow by defender, or to step around a pick and block g shot! Unfortunately, your player has only a limited amount of turbo power, indicated by the meter under your player’s name.

As you use it, the meter runs down, but when you release TURBO, it begins to regenerate. A player D using Turbo can be spotted by his colored shoes! When a player is « on fire, » he has unlimited turbo until his fire IS put out, but to use the turbo, the button must still be held!

Tapping TURBO several times quickly causes your player to grab the to ball and throw his elbows, a move which can often knock defenders away and give you a clean shot at the basket.

When your player has the ball near the basket,

pressing these two buttons causes you (and on a one-human team, your computer teammate) to go for the jam, slam-dunking the ball into the basket. There are many spectacular « Ultra-Jams » that can be executed, depending on a number of factors such as the players dunking ability and position. Sometimes these rim-rockers will even shatter the backboard! Your player will only jam if he is moving, however, so be sure to drive towards the hole if you want to slam!

When your team doesn’t have the ball,

pressing these two buttons makes your player go for a super block, jumping higher than he ordinarily would!

Pressing these buttons will cause the ball-handler to execute a much faster and safer pass than the PASS button by itself. Often these will take the form of behind-the-back or bounce passes. Pressing these buttons when your player doesn’t have the ball makes your player shove. When the shove connects, it knocks a player down onto the floor, out of the way, or even into the stands. Be careful, because you can knock down your own player too! Defensively the shove is a useful tool for stealing the ball, bringing down rebounds, and stopping « easy jams! » Offensively the shove is a good way to clear an area so a teammate has dear shot at the basket.