You now own the authentic Konami home version of Simon’s Quest, one of Konami’s many original arcade hits. We suggest that you read this instruction manual thoroughly before playing the game.

THE SECOND COMING OF COUNT DRACULA

You’re Simon Belmont, bravest of the brave, boldest of the bold, a gothic warrior respected by kings.

You earned your praise, not by crushing Viking invaders or Turkish hordes, but by destroying the evil Count Dracula in a duel to the death at Castlevania. But your victory proved painful, as the wounds inflicted during the duel slowly gnawed at your soul.

One day, though, a beautiful maiden appeared. With a soft voice she warned that you were possessed by the Count’s curse. She said your only hope of destroying the curse and healing your scars was to find the five body parts of Count Dracula and burn them in his Castle, ending forever the reign of the Prince of Darkness.

Suddenly, like most beautiful visions, she began to fade. And as you reached to touch her, she spoke her final words- « Fear not, brave Simon, for if you have the courage to risk your life, you will find the strength to win again.«

HOW TO USE YOUR CONTROLLER

Up and Down
Press Up or Down to go up and down stairs.

When in front of a door, pressU p to go inside.

To squat and avoid enemy projetiles, simply press Down.

Left and Right
Left or Right to go to the left or right.

Press the Select Button during the game to pause.

Press B Button to lash with a whip.

If you press B Button and A Button simultaneously, you can jump and lash with a whip at the same time.

Also press B Button to talk with the friendly Transylvarnan villagers and merchants.

Press the Start Button to begin the game.

Press during the middle of the game to display a « Multi Screen« , which gives you the option to choose from weapons and magical items you’ve found. Press again after making your selection to return to the game.

HOW TO USE CERTAIN WEAPONS

Press Up on the Control Pad while pressing B Button to throw the Holy Water or Dagger, drive in the Oak Stake, use the Flame, place the Garlic in strategic locations, etc.

In this one-player adventure your quest is to discover Count Dracula’s 5 missing body parts. Upon finding these gruesome items, proceed to Dracula’s Castle, where you’ll again duel to the death with the Count. But heed the spirit’s warning and find the Magic Cross before entering his domain.

This quest won’t be easy, for you must banttle hideous fiends who stalk the land. Fortunately, the longer you survive, the greater your Experience Rating and the less vulnerable your troubled soul.

Secrets to this adventure can be found as you wander around friendly Transylvania. Stop and talk to the villagers, because these helpful strangers will give you clues. Some are also merchants who’ll sell you weapons and other mystical items. Your purchasing power depends on how many hearts you’ve collected during your confrontations with evil.

Another warning from the spirit: a few friendly villagers are town pranksters, and their clues are false. Of course. you’ll never know until you take the chance. 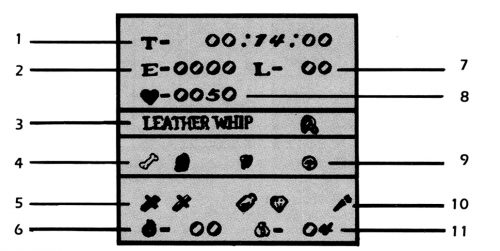 When the sun shines bright on this Eastern European village, all appears well and calm. This is a perfect time to discover clues and purchase weapons.

Transylvania At the Stroke of Midnight

When the sun sets behind the Transylvanian Mountains, the friendly villagers scatter for the safety of their homes, as creatures of all shapes, sizes and hairiness roam the darkness.

There are 5 mansions located throughout the Transylvanian countryside, and within each is a heavily guarded piece of the Count’ s corpse.

You’ll enter the Church through certain doors in the village. When you arrive, a holy man will return your strength and give you the courage to continue.

The ferryman will know exactly where to take you, depending on the body parts you possess. Have confidence in this man; he knows where he’s going.

Enemy creatures scour the countryside. You must destroy these dastardly beings to increase your experience and gain hearts (purchasing power).

Bridge Over the River Die

Enemy creatures await you on the bridge as well, and getting to the other side will be more terrifying than a traffic jam on the Golden Gate.

Are you dying to get into the graveyard? If so, find the old man, who is caretaker for the dead.

The nail is the symbol of evil power.

When it comes to the most frightening piece, the eyes have it.

The rib bone will make the ordinary hero feel like a spineless coward.

The Heart of Dracula

Watch out! The heart attacks.

The dagger can be thrown to kill distant enemy creatures.

The Silver Knife can be thrown farther than the dagger.

This is your strongest knife, and it has a mysterious power.

You’ll need the Oak Stake to collect Dracula’s corpse at the mansions.

This is the weapon you begin the game with.

The Thorn Whip is stronger than the Leather Whip.

The Chain Whip is stronger than the Thorn Whip.

The Morning Star is longer than the Chain Whip.

Magic changes the Morning Star into the Flame Whip and gives it mysterious powers.

You must have the Cross to seal Dracula’s fate.

The White Crystal offers a weakened source of magic power.

You must have the Red Crystal before you enter Dracula’s Castle.

Place the Garlic in front of enemies. and it will weaken them significantly.

Toss it and see what happens.

If you have the Silk Bag you can carry a larger supply of medicinal herbs.

Hearts appear when you destroy an enemy creature. Collect them because they will increase your Experience Rating and give you extra purchasing power.

Laurel helps make you invincible against enemy attacks. You can purchase Laurel from town merchants.